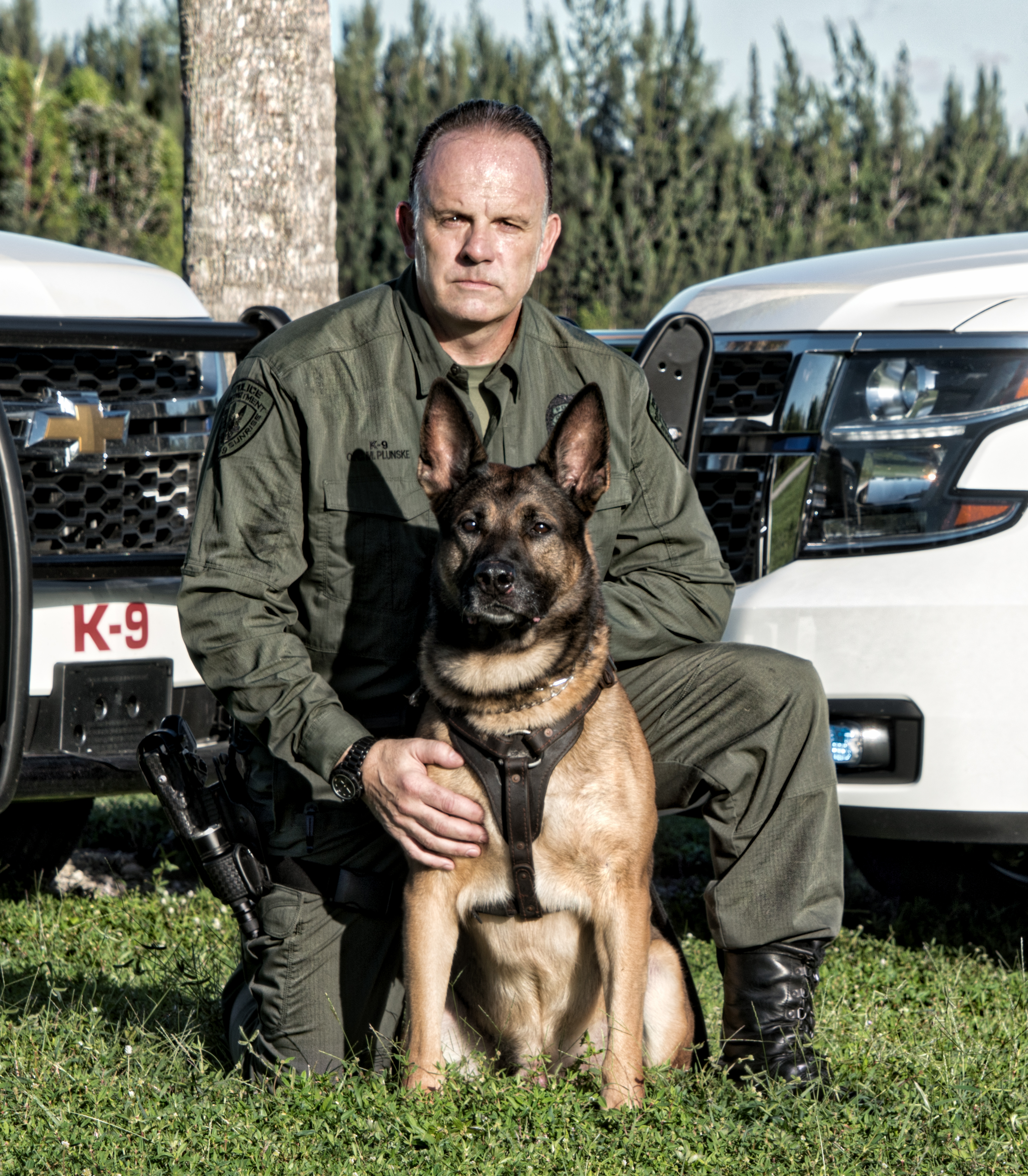 Marc Plunske began his law enforcement career in 1986 and was certified as a K-9 handler in 1992. He retired from the Sunrise Police Department, Broward County, Florida in 2015 and transitioned to a K9 training position with United States Army Special Operations Command until 2020. He has been a certified State of Florida K-9 Instructor since 1997 and is also a Florida Department of Law Enforcement (FDLE) certified K-9 Team Evaluator. Marc has taught numerous K-9 academies and trained well over 150 K9 teams in South Florida in patrol and detection. While employed with his department Marc supervised weekly training for more than 10 surrounding police agencies, (Dade, Broward and Palm Beach Counties), and has trained hundreds of teams at K-9 seminars conducted throughout the United States and internationally. In 2012 he was chosen by FDLE as a subject matter expert to assist in developing updated standards and certification for the State of Florida Canine Curriculum. During his tenure with USASOC, his duties included the training of new and established K9 teams and opportunity to travel numerous times to Europe for the selection of canines from top rated kennels and trainers.

Marc specializes in K-9 Team “problem solving” and stresses the importance of Reality Based Training. He is the owner and founder of Police Canine Consultants.

Memberships (Past and Present) 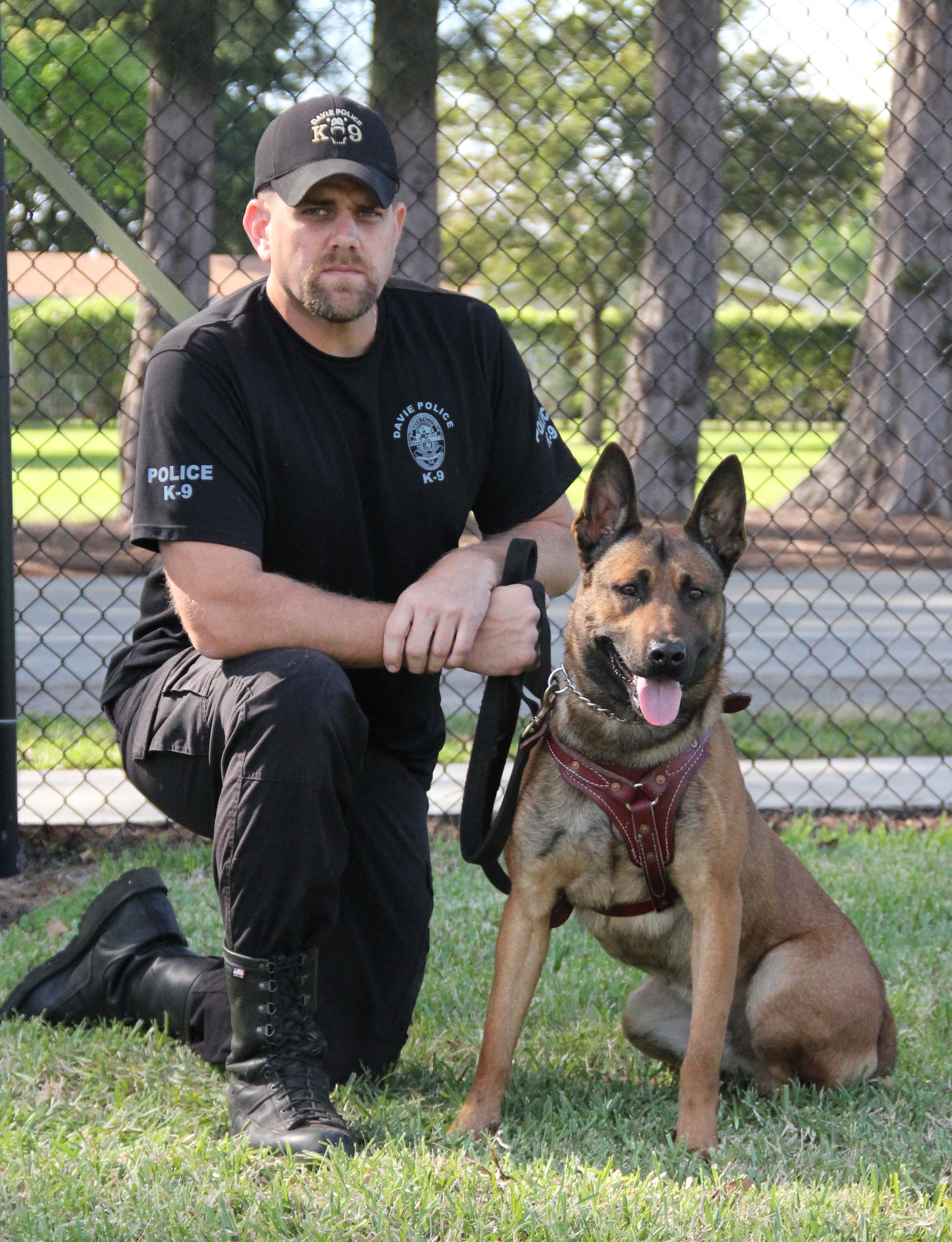 Sgt. Chad Bishop has been a Law enforcement Officer for the Town of Davie Police Department, in South Florida, since 1997. Chad has been working and training patrol and detection dogs since 2002 and is currently the Sergeant overseeing the canine and mounted units. He is a certified State of Florida FDLE K-9 Team Instructor and Evaluator. Chad is an adjunct instructor at the Broward Institute of Public Safety and a current board member of the Florida Law Enforcement Canine Association, (FLECA) overseeing training and standards. Chad has trained over 90 K-9 teams in South Florida and currently supervises weekly training for more than 10 surrounding police agencies, (Dade, Broward and Palm Beach Counties). He has trained hundreds of teams during K-9 seminars conducted throughout the South East United States and internationally. Chad is currently working his fourth patrol / detection dog. Chad specializes in K-9 Team “problem solving”, positive reinforcement training and stresses the importance of Reality Based Training. 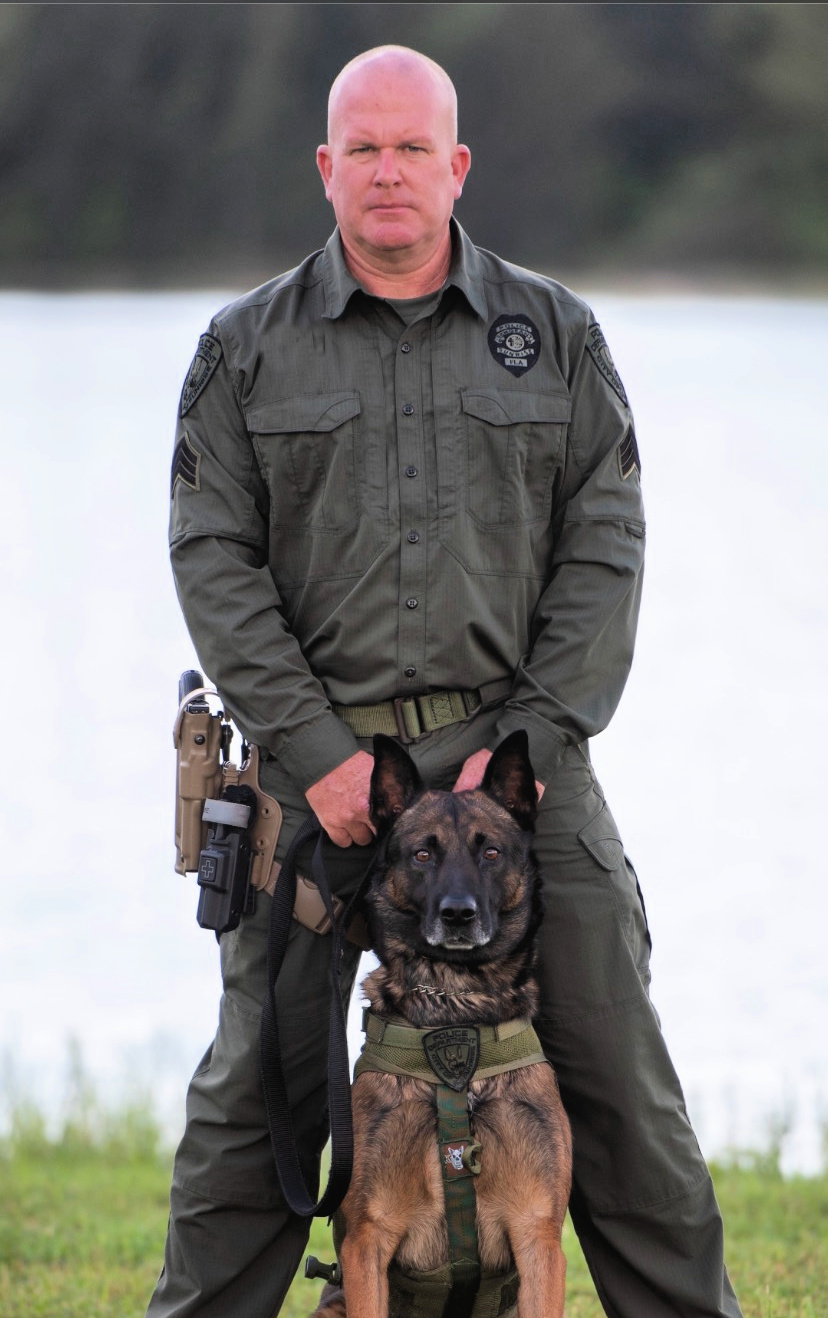 Major Keven Sweat has been a Law enforcement Officer for the City of Sunrise Police Department, in South Florida, since 1997 and an active member of the department’s K-9 unit since 2002 working both patrol and detection dogs. Keven is currently the Major overseeing the division which includes his department’s canine unit. He has been a certified FDLE Canine Team Instructor since 2008 and a Certified FDLE Canine Evaluator since 2009. Keven has trained over 20 K-9 teams in South Florida for patrol and over 250 teams in detection. He has an active role as an instructor and coordinator in weekly K-9 patrol and detection training for several surrounding police agencies (Broward, Dade and Palm Beach Counties).

Keven specializes in the imprinting and training of canine detection teams in all facets of training as well as Canine Unit Supervision and Administration. 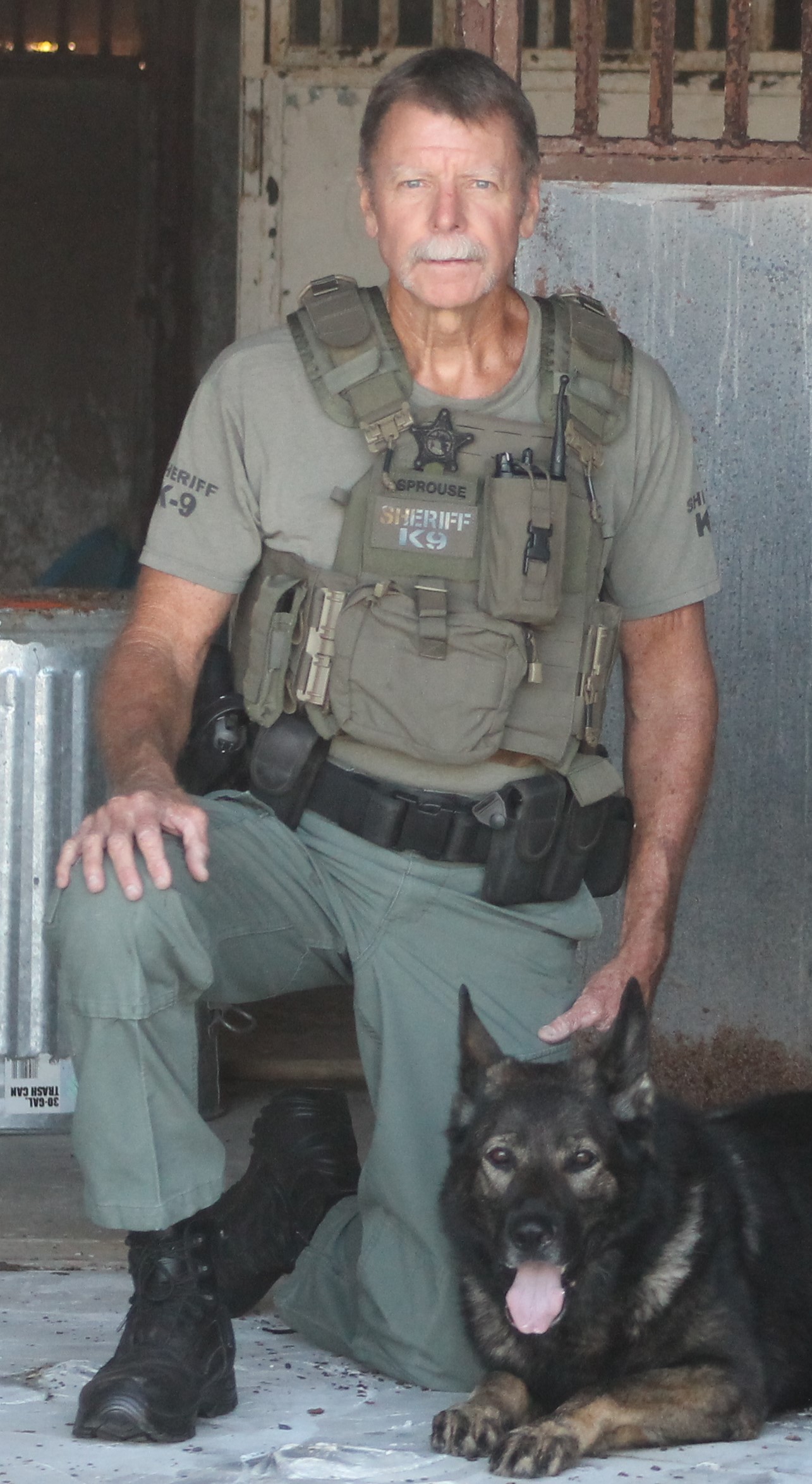 Steve Sprouse has been in law enforcement since 1983 and a K-9 officer since 1988. He retired as the trainer for the Broward County Sheriff’s Office, located in South East Florida in 2018. Steve has been an FDLE certified canine instructor since 1993. He is a USPCA regional patrol dog and detection dog judge. He has competed and placed as high as first place in numerous regional and national police canine events but believes training for the street takes priority. Steve’s third dog was one of five dogs in the nation to receive “Honorable Mention” in the AKC 2002 Law Enforcement Dog of the Year award. Steve and his canine partners throughout his career have been involved in hundreds of K-9 apprehensions, many resulting in canine use of force. In 1989, Steve was shot and seriously wounded in a K-9 deployment and has since been involved in the importance of training for reality. He has lectured and taught numerous K-9 classes and seminars throughout the U.S. and has had several canine training articles published in popular police K-9 publications.

Steve is the owner and founder of the ArminLeggan® training systems which was developed to enhance the performance and working ability of law enforcement and military canines.

Steve is internationally renown for his reality based training philosophies and has taught hundreds of canines teams domestically and abroad. 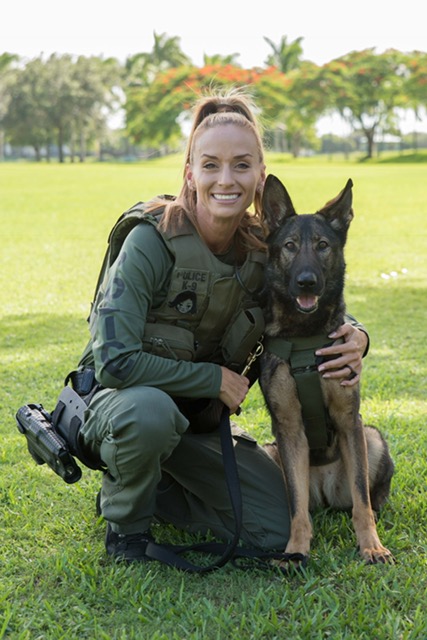 Kim Parnofiello has been a Police Officer for the City of Sunrise Police Department, in South Florida, since 2002 and an active member of the department’s K-9 unit since 2004.  Kim is currently working two canines, a single purpose Narcotics detection and missing person dog and a Person Borne Improvised Explosives Detection (PBIED) dog.  Kim has trained numerous Detection K-9 teams in South Florida and is responsible for weekly maintenance training of the South Florida Multi-agency K9 Group’s monthly detection training. Kim has travelled internationally sharing her experience and expertise in k9 detection operations.  Kim is a certified detection instructor and evaluator for the Florida Law Enforcement Canine Association. 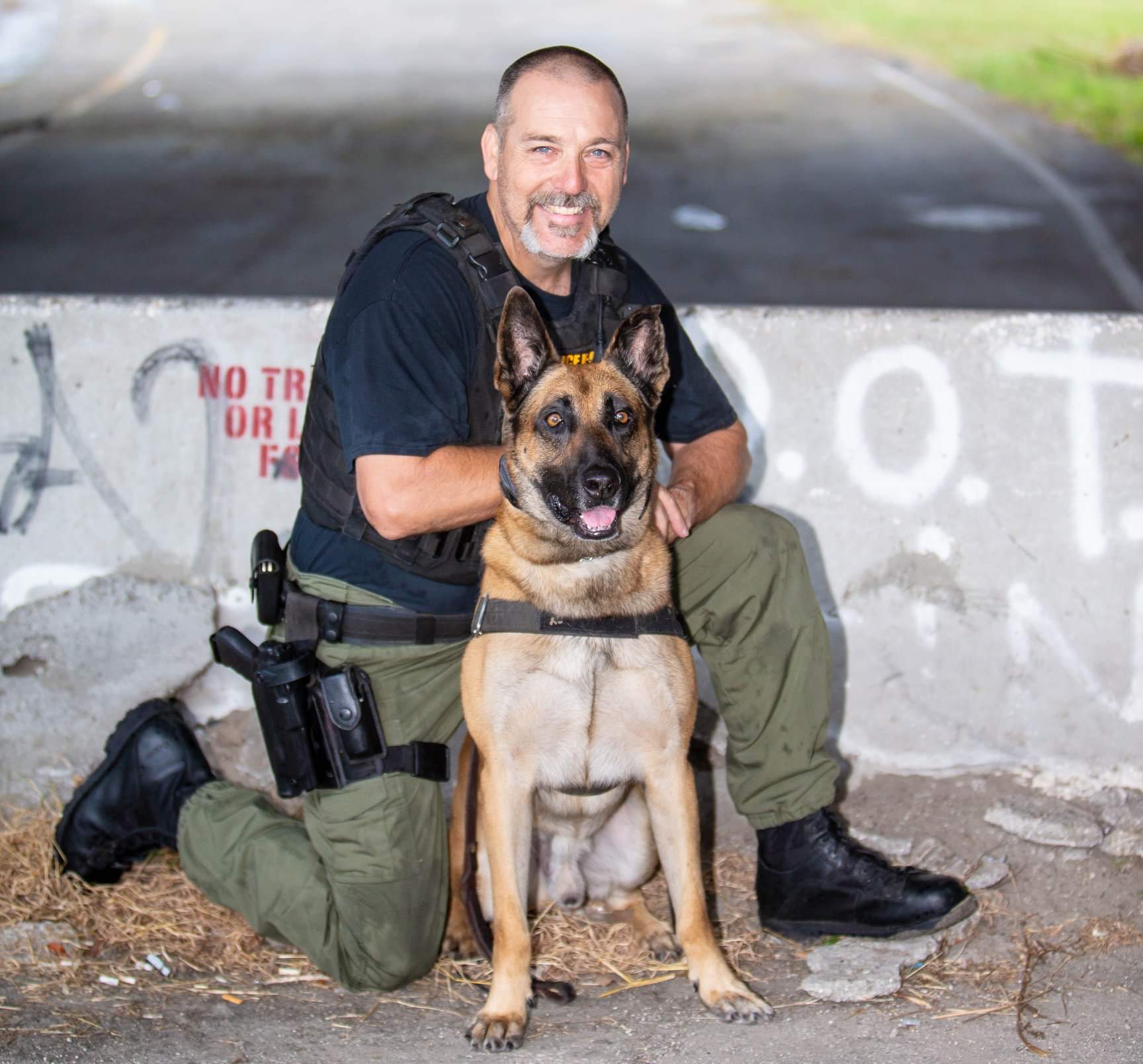 Officer Ed Sullivan served 32 years with the Jacksonville Sheriff’s Office and is currently retired. He has 24 years of experience as a handler of dual-purpose police service dogs, handling both explosives/patrol and narcotics/patrol dogs. His expertise includes 19 years as a canine trainer and instructor for the Jacksonville Sheriff’s Office, the Northeast Florida and South Georgia regions. His specialties include teaching numerous explosives canine schools, narcotic detector and patrol dog schools, and providing daily unit training while working an explosives detector/patrol dog.  He is active as a canine evaluator for several canine organizations such as; The National Police Canine Association (NPCA), the Florida Department of Law Enforcement (FDLE) and the International Police Service Dog Program (PSP).

Currently, he is certified through FDLE as an instructor in many high liability areas. Those areas include training law enforcement and civilian personnel in: Firearms, Driving, Defensive Tactics, and Canine.  He also maintains his instructor status in Precision Immobilization Techniques (PIT), Active Shooter Response and a few others.  As an adjunct instructor, he continues to teach at the North East Florida Criminal Justice Training and Education Center with the Florida State College at Jacksonville.  Ed was one of many trainers involved in a two-year project for the State of Florida, to create a canine program to include; curriculum and certification for the entire canine industry in Florida.  This program is the current standard utilized for all handlers in this state who wish to participate and certify under the Florida Department of Law Enforcement. Ed is often consulted as a subject matter expert for the state of Florida on training and curriculum within his fields of expertise.